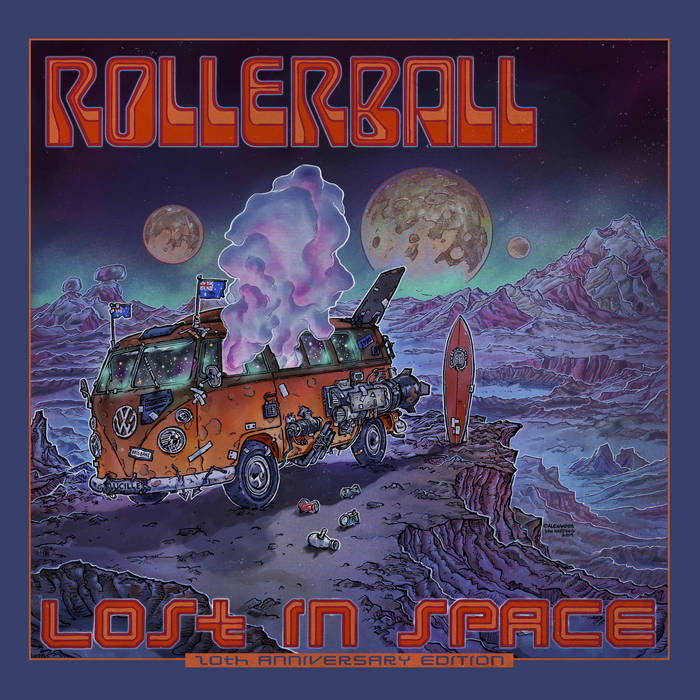 Bucky What a back story and one where the music remains timeless. ‘Lost in Space’ has a polished fuzz tone and beach-baked rhythm motored by the Triumph-fueled vocals of Ben Tenpin and mastermind of Dave Talon. Mandatory vinyl for any hard rock record collection. This is a stone-cold classic I’m guessing many of you are not aware of much like myself before Volcano Vinyl put it up here for its first time on wax.

Shayne Dey Saw Rollerball so many times back in the day. I’d kill to see them play again. So many great memories I’ll never forget, my favourite Aussie band ever.
PS. Just got word the Ball are preparing to tour again!!! I’m besides myself. Favorite track: Lost In Space.

Sometime in late 1997, i ran into Matt Boland in front of the Broadbeach Tavern. i had been combing the Gold coast for a singer to front the power trio i was forming with drummer Jonno Beeswax Keehn, and Matt was on top of a very short list. We had played several shows together throughout
the nineties and had previously discussed the possibility of doing a project together. That afternoon on the Broadbeach shoreline, we nutted out a basic plan and in early 1998, along with his former band mate Gav Guvnor McLaughlin, set up shop in a single garage storage space in Burleigh Heads that Beeswax and i were still holding onto after the demise of our previous band Load.

Within a few months, we had about a dozen songs and started to entertain the idea of gigging. My long time mate and sometimes collaborator Justin Gane would drop in to our shed rehearsals with friends and a video camera. Justin had been very successful making independent surf videos throughout the nineties and was spending a lot of time sourcing tunes for his releases. He and i had a lot of like-minded ideas about Rock’n’Roll and over a yum cha lunch, we mapped out a plan to get the band into the studio to record some of our songs plus instrumental themes for his videos.

Rocking Horse Studios in the hills behind Byron Bay was the obvious choice. a well-designed traditional studio, isolated from the world with great accommodation and a great house engineer: Anthony Lycenko had recently returned from working as an assistant engineer on top end productions in england and brought an arsenal of old school recording techniques back with him. He was also a great musician with the right temperament and all the tools and instruments needed to complement a retro production. in short: The right man for the job! Rollerball had two sessions at Rocking Horse in 1998. The first before we had played a single gig!

The year 2019 marks the 20th anniversary of the release of Lost In Space on Brisbane label Rhythm Ace. That’s a good excuse to finally press it to vinyl. This record is also the debut release for Volcano Vinyl, owned by my old friend Justin Gane.With Justin behind this little project and Alex von Wieding putting his take on the original artwork, i couldn’t be happier.

Turn it up!
Dave Talon

Rollerball are an iconic hard rock band from Australia that formed back in 1998.
Their unique grooving sound is a fusion of stoner, space and 70's hard rock'n blues.
Nobody ROCKS like ROLLERBALL!!!

Bandcamp Daily  your guide to the world of Bandcamp